The people have spoken: join the ban treaty!

This article was originally published by PAX on 22 January 201 and is reproduced with the kind permission of the author.

People in the Netherlands and five other NATO states overwhelmingly reject the presence of US nuclear weapons and support the Treaty to Prohibition of Nuclear Weapons (TPNW). In fact, according to polls, support for the Dutch joining the nuclear ban continues to increase.

In the new YouGov poll released today, the results are clear: 78% of Dutch people want the government to join the UN Treaty on the Prohibition of Nuclear Weapons. In fact, 68% said the Netherlands should be among the first members of the North Atlantic Treaty Organisation (NATO) to join, even if the country were pressured by the United States of America not to do so.

A similar poll was conducted in 2019, at which time only 62% of people wanted the Dutch government to join the ban. These new numbers reflect a growing understanding that there are no safe hands for the world’s worst weapons.

These results were released on the same day the TPNW entered into force, a milestone triggered after the treaty reached 50 state parties last October. The treaty prohibits nations from developing, testing, producing, manufacturing, transferring, possessing, stockpiling, using or threatening to use nuclear weapons, or allowing nuclear weapons to be stationed on their territory. The treaty was adopted at the UN in 2017. The Netherland’s current policies are not in compliance with the treaty according to the 2020 Nuclear Ban Monitor.

The survey of 1029 Netherlanders found that 78% favor the Netherlands joining the TPNW and the governments current position against the treaty is only supported by 7% of people. Even when informed that their country faces strong pressure from certain NATO allies to reject the TPNW, 68% of the Dutch want their government to show leadership and be among the first to join the treaty.

Beatrice Fihn, Executive Director of ICAN said, “Today, nuclear weapons are officially banned under international law, and not a moment too soon. The Dutch government’s official position is no longer tenable.”

Most Dutch surveyed were unaware (61%) or uncertain (21%) that their country hosts US nuclear weapons and has agreed to participate in a nuclear attack if ever called upon to do so by the US and NATO. A majority (68%) want US nuclear weapons gone once informed of their presence as part of NATO’s ‘Nuclear Sharing’ mission.

Currently, there are about 20 nuclear weapons stored at the Dutch airbase at Volkel. While the official policy is not to confirm or deny their presence, NATO and Dutch leadership have both implied that the weapons are there during a series of nuclear weapons exercises this past October. At the time, Dutch Defence Minister Ank Bijleveld said that “if you practice it, you must also have the weapons there”, prompting questioning from parliament.

Ms. Fihn continued, “This past year has made clear what most have known all along — no one man, not even a ‘stable genius,’ should have the power to destroy humanity. The Dutch do not want their military to be asked to commit crimes against humanity on behalf of the U.S. and NATO. It’s immoral. It’s inhumane. And now, it’s illegal.”

Similar surveys were conducted in Belgium, Denmark, Iceland, Italy and Spain that showed support near or over 80% for the ban treaty. NATO has a stated commitment to support nuclear disarmament and democracy, but has opposed the TPNW at each step, against the will of its member populations.

For the full survey results, see the paper released by ICAN. 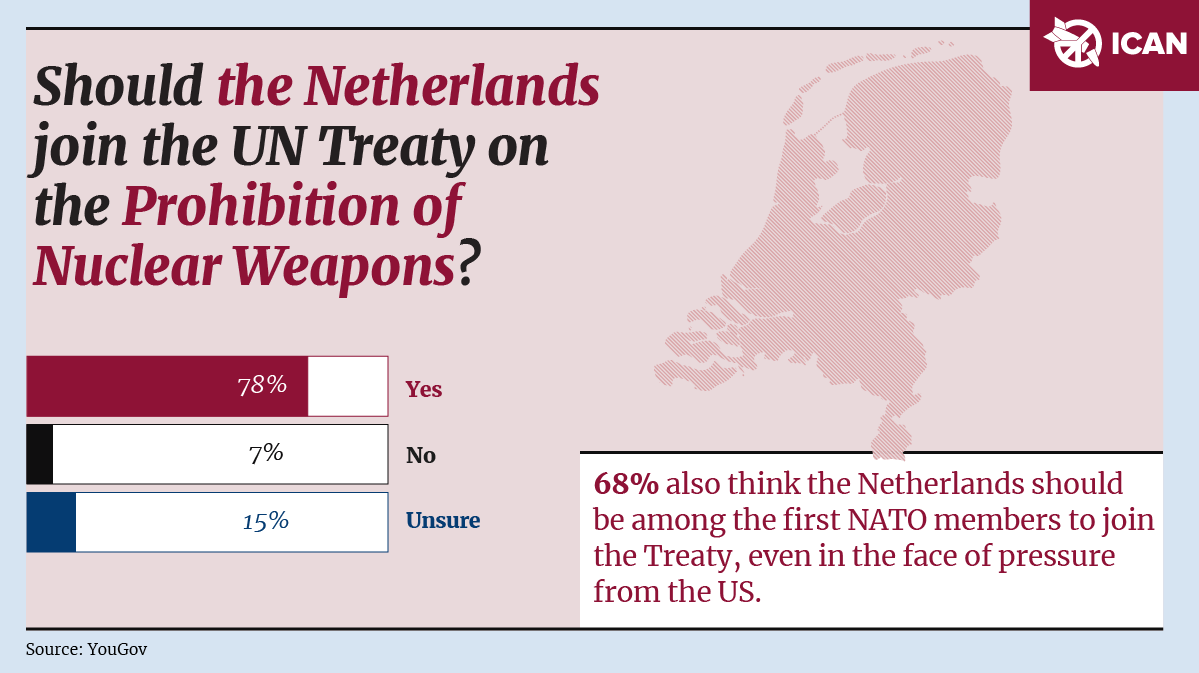